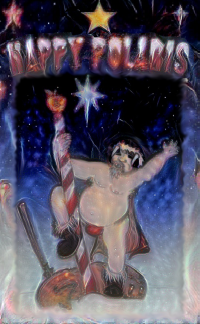 Polaris is a Discordic-Nordic-Aztec-toonic year-end festival.

The basic idea here is as follows: In the time „between the years“ (after the holidays, but before the new year) one often has the feeling that time would stand still. (At least if you manage to come to your senses at all in today's year-end hustle and bustle.) The old year is already over, the new one hasn't started yet… Then you tend to ponder what you did wrong or missed last year and how you could do better in the new year - no wonder that many people get depressed.

The festival Polaris now starts with this „feeling of stagnation“ and tries to eliminate it with all sorts of cultic-ritual hullabaloo.

Borrowings are made by the Aztecs, who believed that the sun would eventually stand still and no longer rise if they were not regularly motivated by blood sacrifices.

I like blood sacrifice. I think we should maybe (ritually) sacrifice all politicians and annoying pests who were a pain in the ass past year.

Of course, we're much more civilized these days. Since we have now come to the conclusion that the sun does not move around the earth at all, but that this impression is caused only by the rotation of the earth, the sun should not be at the centre of the celebration like at the old end-of-year celebrations (solstice, sol invictus, etc.), but the earth's axis.

It is symbolized by the good old North Pole, as it is known from many cartoons and other movies.

So a red-white-spiral painted post with a golden knob (golden apple?). If you like, you can also hang a star above it, the Stella Polaris. Also the blood sacrifices are omitted (The stains are so hard to clean).

Disappointing. Instead they march or dance around the North Pole and sing „you spin me right round baby right round“ to prevent the earth from stopping.

(Pay attention to the correct direction of rotation, so that the earth does not turn the wrong way for one year, that would bring bad luck!)

If you have to take a break because you have become dizzy, you can have a snack at the buffet in between (Or at the bar. You will feel more nauseous afterwards, but that won't bother you as much anymore).

Alternatively one could use a rotating post, which is kept in rotation during the holidays, similar to the large Tibetan prayer wheels or the rollers in the Time Temple of the Discworld, the Monastery of Oi-Dong.

The whole thing then looks like the columns in front of hairdresser's shops, the barber's pole, whereby a new haircut at the beginning of the year can also be helpful. Besides it is old tradition that one gives away small spinning tops to this purpose to Shnapsfunfen (another new traditionel discordian Tradition), which are turned every now and then between the holidays.

I would still vote for a sacrifice in the form of a great fire in which you symbolically burn everything that pissed you off. Then baked apples are served.

You want to hear a bedtime story Chaosling? Far in the north behind the last trees lives an old Inuit walrus hunter. His clothes are red from the blood of the walruses and covered with the white fur of the polar bears and polar rabbits. His belly is fat and his face tells the stories of a thousand lives. There he lives at the northern pole, not far from a pole that was rammed into the ice. At the beginning of each year he leaves and hunts a big walrus around the pole all year round. Then at the end of each year, when he is already emaciated from the eternal hunt and his clothes torn, he finally catches it up and kills it to eat it. This old Inuit is called by us the Poledancer, because as it was always needed he dances also this year again around the pole caught in eternal hunt. But chaosling you must know it's his hunt that makes the earth turn. Always around the pole, always around the pole, so year after year and when the year comes to an end the walrus dies again and the Inuit eats enough of it, dances one last dance around the pole, throwing off his old clothes, then makes new clothes and waits for the moment when the walrus falls from the sky again. And in that time when the candywitches, inspired by an ancient instinct, are starting to bake walrus cookies, it's us who keep the world turning. The Inuit eats enough, we always turn the world around the pole for him, always around the pole. And so he gets his strength in the days before the end of the year, gets thicker again and holds the pole in place with this weight. And when the new year begins, the eternal hunt of the pole dancer begins again. Our task meanwhile, little chaosling, is to dance for him around the pole in those times when the pole dancer eats and sews his clothes. The Candywitches bake cookies. They look like walruses. Their candy canes look like the pole of the North Pole. Coincidence? Always around the pole. So in this short time, in which the days seem so much more endless to us, the world has always been kept going as tradition wants it. In memory of the Poledancer.