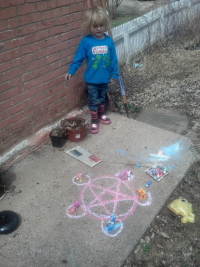 Be like the children they said. Maybe? Why not!.

Further explanations to the discordian magic from

Xerxes - Thinker of the last time, master talking only bullshit, official pimp of Pandora's box and medium of Nyar Palay,witness of eternal madness and carrier of a soul, developer of the xerxism and knower of newt, magican of the 0 degree and eternal smartypants for the purpouse of Nyar Palay, realizer of the coathanger.

Cpt. Bucky Saia alias pope Cerrynt Eiledol from Welodd alias Nede E Lym from Leng alias Baktus Paradonti, Moonman Winter Dream, of the third past, general Error of the invasion troops, Captainof the first eristic chomminess in the west of the east, keeper of the houly GNARV and other useless things, darkelvish bishop of Betty, chairman of the company for life, nominator of the Fonsis for a time, the one during a bath honourable enlightend one, protector of the smokeing oracle at a shaft, excellent hybridizer of the finest airports north of Reykjavík, urgent houlycarer of the aktion 23, (de)ciser of the starfish mythos, translucent secretmonger and backhandedly vendor, sliderking of the unknown, author of unwritten works, authorised dealer of „the light™“ and „salvation™“, privy overanti of the D.A.D. and pharao hypothep alias pharao pontifex to Popanz of Paranoia Panoptikum, bureaucrat in the bureau of misappropriation, user of the methods and universalgod No. 5

One of the biggest falsities of modern magic is assumeing that discordian magic works similar to a classical school including chaos magic. Discordian magic gains strength threw the eristic and anersitic energy and the last is everythere, while the first one is easy to create if you know how to. The Phool knows that. Because of that it is false to assume discordian magic needs meditation or gnosis. The Phool enters threw In-sanity a state of madness, in which he can perceive and channel energy. Because all illuminated discordian labour under some sort of In-sanity and Phools even more, is it easy for the to channel these energys.

Discordians discriminate from Phools, that they are somewhat conciousness about the eristic energy they emit, but dont use it that purposefully. When a discordian uses his eristic energy, most of the times he dconfuses others to illuminate them. Even discordian dont understand sometimes what Phools are speaking of, because they think its enough to illuminate enough humans to solve the problem of the aneristic energy. So you could say the classical discordian pope is a user of spiritual energy. But Phools use this energy actively. The notice which objects generate the appropriate energy and know how to manipulate it skillfully. Also a Phool can design situations that generate eristic energy, which he then can use. The more eristic energy a Phool can generate, the more powerful he is.

We live in an aneristc matured world. Eristic energy is in this medium very volatile, if it isnt bind by objects in certain places. A singnalless TV in a messy dark flat is a wonderful fokus for ersitc energy, for whatever reason. In the normal state there is so much aneristic energy, that the eristic energy evades in a matter of minutes. Phools can hold on to these energys a bit longer and use them pointedly. Beside that Phools can anyway produce enough eristic energy threw acts of chaos and confusion, that they can use for themselves afterwards. So you could say, Phools produce their own energy.

And this is the fallacy of classical systems. We dont bucket from a source beyond. We are the source. We can prdouce our own energy and that when and wherever we want and everything what we need is In-Sanity. And this power we shall sacrifice for a discordian illuminated mankind?

A short list of explanations of some things, that let you understand the text better.