Life is a game you can either play or flee.
Antworten
16 BeitrГӨge

Communications from Elsewhere hat geschrieben:[table=border:1px solid #333333;][tr=border: none;][td=border: none;]
This is a mirrored copy of http://www.geocities.com/nconner23/bwcards.html
The original page may have changed since May 8, 2002, when this copy was stored.
This mirror provided by Communications From Elsewhere
[/td][/tr][/table]
1000 Blank White Cards
(The Discordian Intelligence Agency Edition)
[tab=30]1000 Blank White Cards is a card game, the purpose of which is to create the cards you're playing with. The original version of the game was created by Nathan McQuillan of Madison, Wisconsin. I originally learned about that version of the game here , although that page hasn't been updated in a while.

[tab=30]This new edition of the game was created in late 2001 by Riff Conner, and has been extensively playtested by the Discordian Intelligence Agency - Riff Conner, Mark and Kelly Hennies, and David Youtz - along with various guest stars. Several rules guidelines have been added, for the purpose of giving it a more gamelike framework.

[tab=30]* A pen for each of them, preferably black. Don't use felt-tips - they soak right through the cards. Pilot Roller-Balls are great.

[tab=30]* A bunch of... blank white cards. We use unlined index cards cut in half. You will need 40, 60, or 90 of them, depending on how many players you have and whether you've played before. It's also good to have some extras on hand.

[tab=30]* If you have played before, you will need the stockpile of cards you had left over from the last game.

[tab=30]Then, pass some blanks out to the players. If there are 3 or 5 players, everyone gets 6; if 4 or 6, they get 5. Everyone will now take a few minutes to turn their blanks into actual cards (this will be explained later on). When everyone's finished, gather up their cards and add them to the deck. You now have either a 60 or 90 card deck, depending on the number of players. (Actually, if you're doing a 3-player game, you only have 58 cards in the deck. Anal-retentive gamers should feel free to add two more blanks.)

[tab=30]Shuffle the deck thoroughly. (Don't bother trying to actually shuffle them - they're too flimsy. Just spread them out on the table and push them around 'till they're well-mixed.) Deal out five cards to each player. Game on!

[tab=30]Play begins with the player to the dealer's left, and generally goes clockwise. On your turn, take the top card from the deck (assuming there are cards left in the deck), and then play a card from your hand. You can play a card either on yourself, on another player, or to the center of the table (in which case it affects all the players, including yourself). If the card has a point value or some other sort of lasting effect, it stays in front of the player it was played on (or in the middle of the table) until it is somehow nullified, discarded, or removed by another card. Otherwise, it is simply placed in the discard pile.

[tab=30]If you have a blank card in your hand, grasp your pen firmly and turn the blank into a playable card (we're getting to that). It's best to do this during the other players' turns, so as to hold up the game as little as possible.

[tab=30]If you cannot play a card (meaning you have no blanks, and none of the cards in your hand can be played in the current situation), then draw a second card from the deck and pass your turn. If you can't do this because there are no cards left in the deck, the game is over. Anyone with cards left in their hands can show them around before discarding them, and then the winner is determined.

[tab=30]Total up the point value of the cards in front of you, and add the point values of any cards played to the center of the table. This is your score (and yes, it can be a negative number). The player with the highest score wins! Woo!

[tab=30]After the game is over, you will have a large pile of cards. The next time you play, you'll be using a random selection of cards from this pile, so naturally you'll be wanting to whittle it down a bit so that only the best cards get re-used. This is what the Epilogue phase of the game is for.

[tab=30]Take all the cards from the game you just finished, as well as any previous cards that didn't get used, and spread them all out on the table, face-up. Then decide how large a stockpile you wish to keep. If this is only your first or second game, start with 30. If you've played several games, go to 60, and once you've played a whole lot of games and have lots of excellent cards, you can advance to a 90-card stockpile. Divide this number by the number of players you've got - we'll call the result "X". So for example, if you want to keep a 60-card stockpile, and there are five players at the table, X equals 12.

[tab=30]Each player then examines the collection of cards and selects their favorite X cards out of all of them. You now have a stockpile, consisting of the best cards that the players have made so far. Whoever is given the task of storing them can snap a rubber band around the deck, and put it on a shelf in preparation for next time. The remaining cards can be thrown away, carefully archived in a huge library of three-ring binders, or baked into a tasty casserole - your choice.
[table=border:1px solid #333333;][tr=][td=]

[/td][td=]
* First, a title. This is what the card is called. Yep.
В
В
В
В
В
В
* Then, a picture of some sort. Artistic ability is not required; if you can do a stick-man, you're ready to go. (During one game, we had so many stick-men on the table, I was forced to implement a card called "Stick-Figure Genocide" to get rid of them all.) If you play a lot, you will discover that your artistic skills gradually improve. Well, your cartooning skills, anyway.
В
В
В
В
В
* And finally, a description of what the card does. This can be a point value, some sort of instruction, or both, or neither.
[/td][/tr][/table]
[tab=30]Point values normally range from 100 to 1000, in 100-point increments, and can be either positive or negative. Other instructions can be pretty much anything: normal card game instructions (Lose a Turn, Draw Another Card, etc.), unusual instructions (Dance Like a Chicken On Fire), or something totally bizarre (Eat This Card For Absolutely No Psychedelic Effect).

[tab=30]And that's really all you need to know. Run with it!

[tab=30]Q: Is winning important in this game?

[tab=30]A: Absolutely not at all. The whole thing is pretty arbitrary and random; in fact, it's almost impossible to win intentionally. Sure, you could make a card that says "+ 1 Hojillion Points" and play it on yourself, but how long do you think it will take another player to make a card that forces you to eat it? Agressive play simply doesn't work very well. The real object of the game is to draw silly pictures and have fun. Cheesy, yes, but true.

[tab=30](If for some reason winning is important to you, try this: after the Epilogue is over, look through the stockpile. If there are more of your cards in there than anyone else's, then you really did win.)


[tab=30]So, that's 1000 Blank White Cards. I highly encourage you to try it out; if you do, please drop me a line and tell me what you thought. But please, don't send me scans of your favorite cards - it's just a Yahoo mailbox, and it's already pretty full. Post the cards on your webpage and send me the link instead. 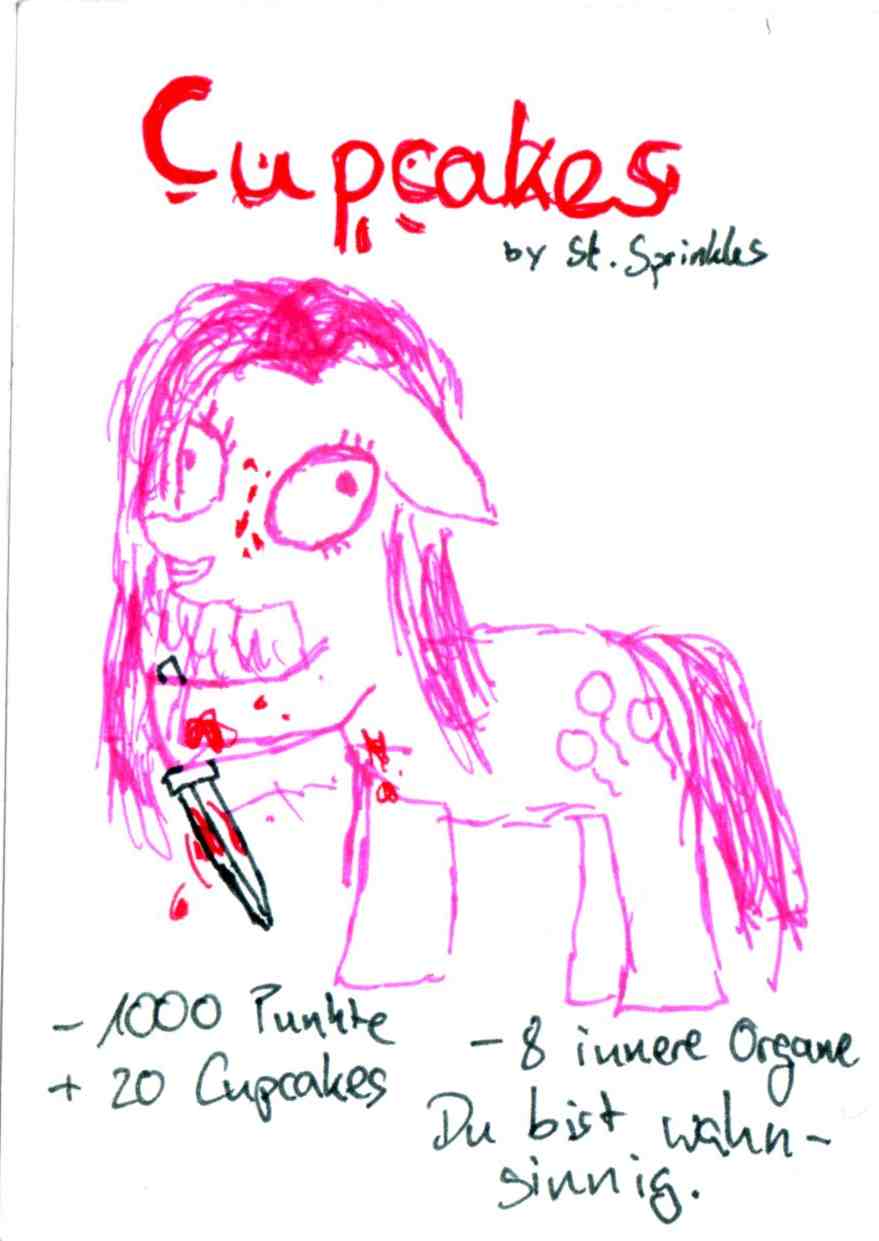 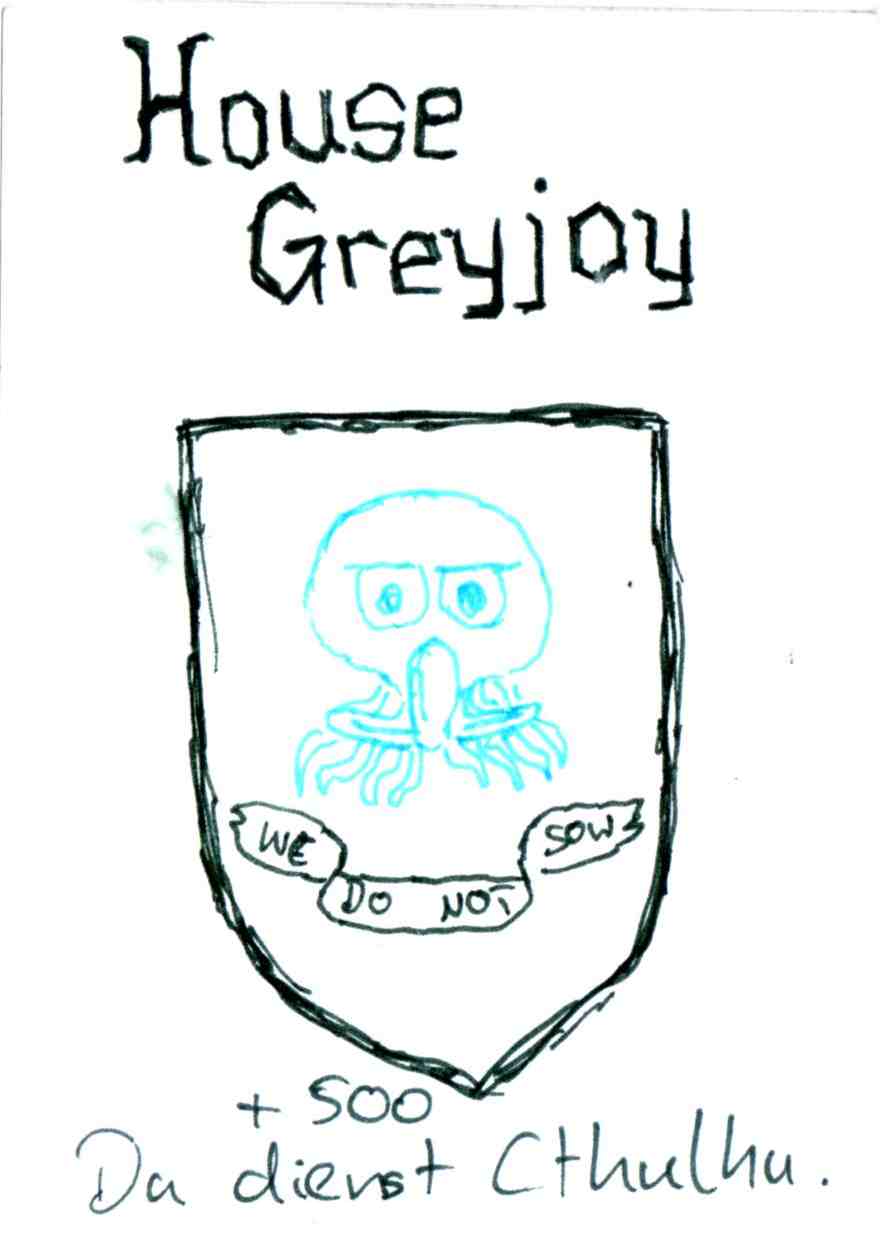 Ein paar davon passen vielleicht nicht so gut zu den Regeln, da sie nur auf alle Spieler gleichzeitig angewendet werden kГ¶nnen.
[url=http://23ae.com/format/discordiancode/code13.html]Discordian Code[/url]: [alt="Internet Discordian / Discordian of Other / Discordian of Unemployed"]DIT/DO/DU[/alt] [alt="Pope / GroГҹwesir"]Tp/Tg[/alt] [alt="I'm usually in jeans and a t-shirt. / My t-shirts have weird logos and cartoons on them. / I wear clothes. / I wear whatever was closest in my closet or floor when I got up."]C++(-)[/alt] [alt="I'm an average-shaped Discordian"]s:[/alt] [alt="20-24"]a--[/alt] [alt="I have a computer and use it regularly, but donвҖҷt invest much time in learning about it. / I am decent with a computer."]Comp(+)[/alt] [alt="Legalize all victimless crimes, downsize Government and the Military, stay out of every other countryвҖҷs business, and let people have sex in the streets."]P++[/alt] [alt="It's ok to increase government spending, so we can help more poor people. Tax the rich! / Capitalism is evil! Government should provide the services we really need. Nobody should be rich."]E-(--)[/alt] [alt="IвҖҷm not always the most gung-ho, but I always seem to be having fun. / I enjoy having fun, but there is a time to be serious too. / I donвҖҷt go out much."]F(+ -)[/alt] [alt="I do not own a television."]!tv[/alt] [alt="I enjoy reading, but don't get the time very often."]b+[/alt] [alt="Interest and participation in Jakes/Mindfucks. 8/10"]OM(8)[/alt] [alt="Interest in movies of (almost) any kind 9/10"]M(9)[/alt] [alt="Everything I write is kopyright reversed unless I say otherwise."]K++[/alt] // [alt="Anarcho-Hedonist, Telekommunist, Antiterrorist des Asozialen Netzwerks, Diskordischer Papst, Mitglied der antiperistaltischen Opposition APO, Leiter des Ministeriums fГјr Informationswiederbeschaffung, Berater des MiniLiebs und des MiniProds, Gedankenpolizist, Soma-Fabrikant, Rekrutierungsbeauftragter der NSA in allen staatlichen und privaten Grundschulen, Inhaber des ersten Gehirnwaschsalons, flausenkГ¶pfiger Oberbefehlshaber der im Untergund agierenden Minionarmee, Inhaber des Internets und KГӨsebildhauer des Mondes. GrГјnder des Vereins fГјr Nichtsnutze, Slacktivists, TraumtГӨnzer, Arbeitsfreie und Prokrastinierer N.S.T.A.P."]Bio[/alt]
Nach oben